Rivers, oceans, and lakes, oh my! Discover how the water cycle renews and cleans the water flowing in watersheds, which are relied on heavily by humans, animals, and plants alike! Also explore the salmon life cycle, and learn how to predict where salmon live in the watershed at each stage of their life cycle!

What Did We Do Today?

In our seventh installment of Junior Biologist Club we are going on a water adventure starting at the dawn of time to ask questions about the history and origins of water. Where did water come from? Did asteroids create water? Are we drinking dinosaur pee? All very important questions that our junior biologists will tackle at the start of our session.

The study of water's origins is examined via the hydrogen ratio to the ratio of deuterium in Earth's oceans which shows close commonalities to that of asteroids. Additionally, there have been discoveries of opals in meteorites that require water to form thus furthering the theory that these space rocks were the catalyst for the creation of water on Earth. However, the origins of water remains debated between either asteroids being the source or the theory that Earth held water when it took shape via ice. Currently the first theory is more popular.

As for the dinosaur pee- yes it's true we are all drinking it. As dinosaurs roamed the earth longer than humans (186 million years during the Mesozoic era), it is theorized that 4 cups out of the 8 recommended cups of water a day have been at one point in time dinosaur pee. It rings true for the Go With the Flow theme in that all water ebbs and flows throughout the world via river, oceans, lakes and yes even through your sweat, tears and pee. It is constantly cycling through the earth and the living beings it hosts.

This water cycle is a massive device of nature that essentially recycles water through several steps. Lets break down these steps to understand this phenomenon. 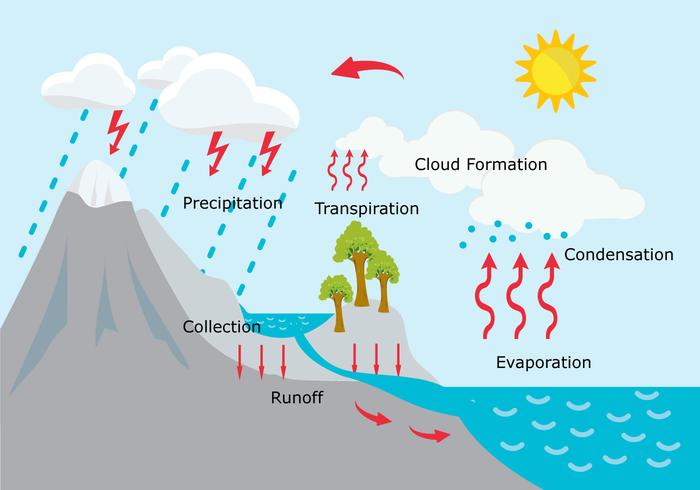 1.Evaporation: Absorbs water molecules via the heat of the sun that cause them to rise up into the atmosphere as invisible vapor.

2.Condensation: Then as the water vapor rises it becomes cool and condenses, typically into small particles. When it condenses it forms into a liquid once more or if it's really cold it turns into a solid form such as ice, hail or snow. This is what creates clouds.

3. Precipitation: This is when rain, hail or snow fall from those clouds. Th clouds are being moved by air currents.

4.Run off: Excess water or snowmelt creates flow into creeks and ditches to thereafter run into rivers, lakes and oceans. Then the whole process begins again!

Now lets see first hand an animal cycle that is directly dependent on the water cycle: salmon. Salmon have a distinct life cycle of going from egg to alevin to fry to smolt to adult then finally become spawners. Within this framework most salmon are anadromous fish, which means they inhabit several ecosystems of water ranging from being spawned in freshwater, to then travel out to the ocean of salt water. Not to mention they live in ponds of gravel as eggs and alevins, to then weave their way through streams to reach the vast ocean. And then they do it all over again to return to their spawning grounds! To take a look at the route we ventured outside to visit the salmon run built by the Aquarium in 2001 to point out how differing ecosystems host salmon throughout their life cycle. 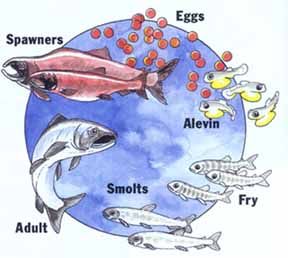 Along the way we will pause to be Jr. Hydrologists and test the water quality with an ammonia kit to open conversation about the importance of water health for animals like salmon and animals up the food chain to ultimately reach us humans.

To wrap up our session we discuss everyday habits to help keep our waters flowing happily such as turning off a faucet while brushing your teeth to limiting those long showers. 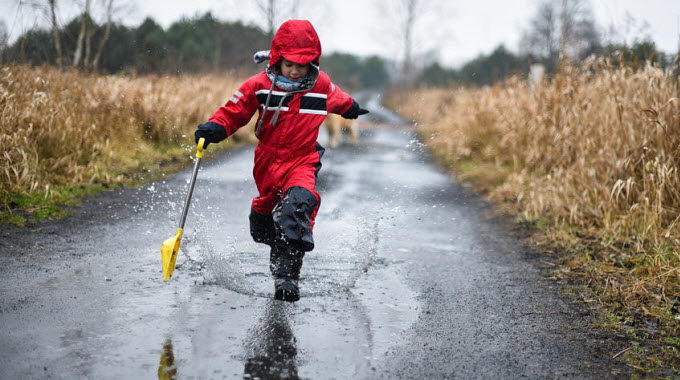 It's a water-ful day that highlights natures dependence on this liquid that keeps us all hydrated as well as providing us with fun puddles to jump in and make a SPLASH!

Questions to ask your Junior Biologists:

1. How old is the water we're drinking?:

Answer: Studies are showing that water is 4.6 billion years old! Essentially think of all water going through the kidneys of all livings things throughout time. That fancy bottle of water? Yep, it likely has dinosaur pee from several different types of dinosaurs.

"Every bottle of Evian you drink from is Tyrannosaurus Rex pee. All the water on Earth has been here for 4.5 billion years. It's all toilet-to-tap at some level."- Charles Fisherman, author of "The Big Thirst: The Secret Life and Turbulent Future of Water".

2. What form does the water take during the process of evaporation?

Answer: During evaporation the liquid form of water transitions into a gas form without forming bubbles. If there were bubbles that would be the process of boiling with heat instead of evaporation.

3. What are the sacks on the chests of alevins chests?

Answer: That is the remains of their egg sack in order for them to receive nutrition. Once that sack and its nutrients are absorbed by alevins they mature into fry. The fry are still small but are then able to begin their journey towards downstream towards the ocean.

4. How many eggs can a salmon spawn?

Answer: Female salmon may lay 2000-5000 eggs. However a small percent of those eggs survive to grow to maturity. There are several factors for this low survival rate such as being eaten by predators, not being fertilized or not finding enough food.

5. What type of steps can we do at home to contribute to the health of our waters?

Answer: There is a wide range of easy steps to take big and small to keep our waters clean for ourselves and for our animals. The key is to reduce the amount of water being wasted. Reusing water whenever possible, limiting that tap from running when is not necessary and even just sharing the awareness of water waste with those around you.

Do you have any questions for Club Volunteers or our Coordinator, Jordan? Ask away on our Discussion Board!

Find a salmon run closest to you here.

Research how salmon make their way to spawn to your salmon run and check out how many spawning salmon you can see!

Understand the basic history and theories of the origins of water on Earth.

Identify the key steps of the water cycle and be able to identify the processes of those steps.

Learn the stages of the salmon life cycle and engage with that process in reference to the ecosystems of water throughout their journey of starting as an egg to becoming a spawner.

Observe the dependence we and all living things have on the water cycle and how human habits impact the health of water.